Register a free account today to become a member! Once signed in, you'll be able to participate on this site by adding your own topics and posts, as well as connect with other members through your own private inbox!

You are using an out of date browser. It may not display this or other websites correctly.
You should upgrade or use an alternative browser.

The forex market is by far the largest and most liquid financial market in the world, with an estimated average global daily turnover of more than US$6.5 trillion — which has risen from $5 trillion just a few years ago.
The forex market is open to buy and sell currencies 24 hours a day, five days a week and is used by banks, businesses, investment firms, hedge funds and retail traders.
One critical feature of the forex market is that there is no central marketplace or exchange in a central location, as all trading is done electronically via computer networks. This is known as an over-the-counter (OTC) market.

Forex trading is the process of speculating on currency prices to potentially make a profit. Currencies are traded in pairs, so by exchanging one currency for another, a trader is speculating on whether one currency will rise or fall in value against the other.
The value of a currency pair is influenced by trade flows, economic, political and geopolitical events which affect the supply and demand of forex. This creates daily volatility that may offer a forex trader new opportunities.
Online trading platforms provided by global brokers like FXTM mean you can buy and sell currencies from your phone, laptop, tablet or PC. 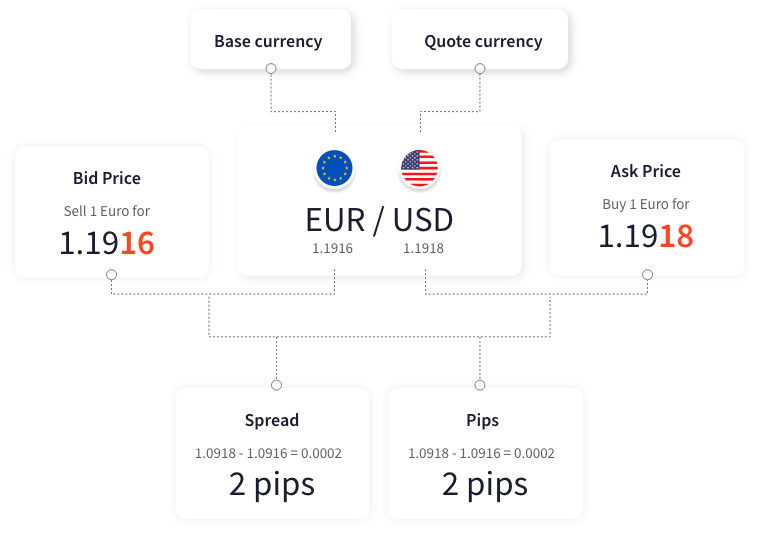 A long position means a trader has bought a currency expecting its value to rise. Once the trader sells that currency back to the market (ideally for a higher price than he or she paid for it), their long position is said to be ‘closed’ and the trade is complete.
So if you wanted to open a long position on the Euro, you would purchase 1 Euro for USD 1.1918. You will then hold your position in the hope that it will appreciate, selling it back to the market at a profit once the price has increased.
A short position refers to a trader who sells a currency expecting its value to fall and plans to buy it back at a lower price. A short position is ‘closed’ once the trader buys back the asset (ideally for less than he or she sold it for).
In this case, if you think the Euro will weaken against the Dollar, you will sell 1 Euro for USD 1.1916 and hold a short position. You expect the Euro to depreciate and plan to buy it back at a lower rate.